We are connecting you with a representative of Berry Global. Maybe you can help us serve you better answering a few questions: 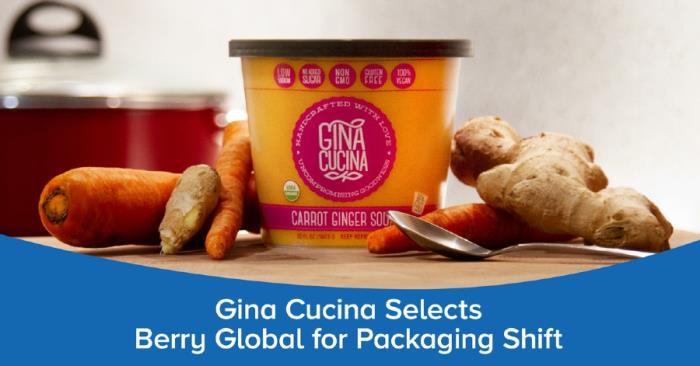 From her fleet to Florence, Italy at the age of eighteen, to pursuing a career in film on the west coast, to catering wellness/yoga retreats in a minuscule mountain town in Colorado, Gina never imagined she would end up with a growing soup business displayed on retail shelves.

Gina Stryker, founder of Gina Cucina, could not stay away from the kitchen, regardless of her current profession. Her devotion to cooking started in a culinary classroom in Florence, Italy. Throughout her journey, her close friends and global connections constantly urged her to start a business. After many years of rejecting the idea, she finally decided to take her best recipe to market.

On a random Saturday during mid-summer, Stryker jarred her soups and took them to the local farmer’s market. After just one hour at the stand, she sold out of her organic soups. For multiple weeks in a row, she continued to impress shoppers and clear her stand even with increased product volume each week. Using a friend’s commercial kitchen, Stryker was able to expand her product line and continue to use her packaging solution – mason jars.

A Big Hit in Supermarkets

In September of 2017, her soup was on the shelves at Whole Foods and sold out in one week. As her business expanded, so did her distribution. More grocery stores wanted Gina Cucina products in stock, but under one condition: plastic packaging. Because of her recent connection with Berry and working closely with Sales Representative, Courtney Peterson, Stryker has been able to transition four of her soups from her original glass packaging to our 410 Plus 20 oz. container with our injection molded container lid to complete a full package.

Gina Cucina soup has been in glass since the beginning, so Stryker was reluctant to explore a packaging shift. She knew her customers loved to see the raw, natural ingredients in her soup, so transparency was a non-negotiable, along with reasonable pricing. Stryker says,

“Courtney has been instrumental in this transition. She made it easy and had solutions to my problems and concerns. She made it possible for manufacturing without much funding.”

With sustainability as an additional concern, Berry Global worked with Gina to provide insights about a glass to plastic conversion, which included a reduction in greenhouse gas emission, carbon dioxide reduction, and carbons sequestered.

Not only was this packaging switch a win from an environmental and economic standpoint, but it was also a win for Stryker. She says,

“I was afraid being in stores would take away from the home-grown feel. That aesthetic is very important to me and I don’t think I would have been able to do this without Berry or Courtney.”

About a year ago, Lion’s Choice connected with Berry Global in hopes to replace their unpopular foam beverage cup with something more sustainable. They found an affordable and more environmentally-friendly alternative with Berry Global.

Berry PET Power has launched an important initiative to enable the company’s smaller customers to have easier purchasing access to packs that incorporate recycled material.

Berry Global is giving happy meal toys a second life- as playground equipment, one step towards a circular supply chain that benefits us all.

Expansion of the Verdant Line Considers the Eco-Conscious Consumer

In the newfound and already widespread demand for sustainable packaging, our recent expansion of the Verdant line supplies consumers with an environmentally-friendly packaging solution.

With the ongoing sustainability conversation at the forefront amongst consumers, alongside Berry Global's commitment to a healthier environment, they have created a more recyclable, single substrate packaging solution.

How Berry Global is protecting our environment through recycling

As consumers wait with bated breath for new routines to resemble normalcy, the needs of the environment have not changed during this challenging time. Good recycling practices are still of paramount importance to help ensure waste does not end up in the environment.

Berry Global Group, Inc. a is proud to announce that it has partnered with Bhoomi to launch a 100% sugarcane-based bottle for their cold-pressed cane water elixir.

The COVID-19 outbreak continues to warrant alterations in many facets of businesses –both large and small. However, last spring, Berry Global also considered the impact upon smaller companies and their supply chains.

Today, Berry Global Group, Inc. announced Science-Based Targets, reinforcing the Company’s commitment to a circular economy in alignment with the worldwide goal of a net-zero economy by 2050.

Berry Global Healthcare is launching what the company claims is the lightest dual-port blow fill seal closure currently available for large volume parenteral applications – up to 64% lighter than some competitor products. The new lightweight Cyrano provides an important sustainability benefit while offering a safe and easy-to-use solution for all types of intravenous and infusion system

Enel X is acknowledging industry-leading companies for energy excellence and sustainability at their 2020 Demand Response Awards and Berry Global is honored to be recognized for their sustainability leadership.

The unforeseen events and lifestyles brought on by 2020 have evolved consumer habits in more ways than one. In comparison to years prior, some consumers are appreciating the small things they might have overlooked pre-COVID-19, including face-to-face engagement, traveling, celebrations of traditions with others, and more.

Adding to our portfolio of award-winning tubes, we are pleased to announce that we have won three silver awards in the Tube Council of North America’s 2020 Tube of the Year competition. 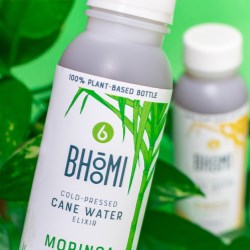 Berry Global Teams Up with Bhoomi to Launch 100% Sugar... 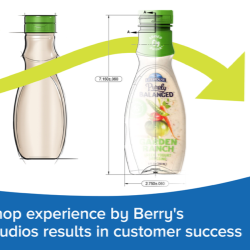 Workshops by Berry’s Blue Clover Studios Result in Cus... 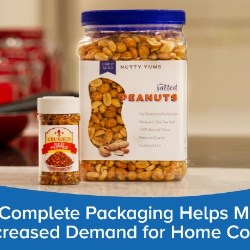 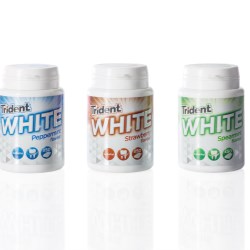