We are connecting you with a representative of F.S.Korea Industries, Inc.. Maybe you can help us serve you better answering a few questions:

The Flatti mascara that applies formula from the root line 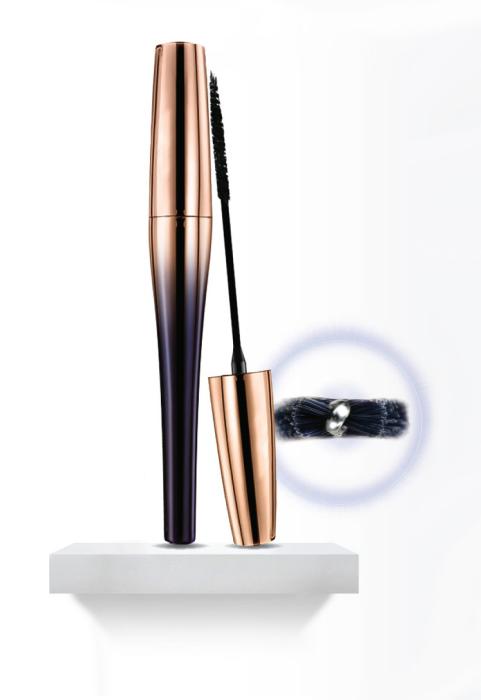 Many types of mascara exist on the market and not all are special – but FS Korea's Flatti is. Coupling a unique flat applicator with a sleek design, the bottle opens with a simple pulling action, and the extraordinary flat applicator reaches deeper into the lash line - super-close to the roots of the lashes.

With Flatti achieving voluptuous lashes couldn’t be easier thanks to its miniaturized flat comb-shaped mascara brush. The tines are designed in such a way to effectively separate lashes and help eliminate clumping issues resulting in extra-long length lashes.

Flatti's amazing applicator is unprecedented in its ability to make up lashes from the root of the lash - closer than any other mascara available on the market. Thanks to its special flat design, a superior volume of lashes can be made up as the bristles carry more formula than other generics.

Until now, a mascara brush with short, comb-shaped and tightly-spaced bristles has been ideal for adding volume, whereas a brush with long and spread-out bristles has been best for lengthening and separating lashes. Now, Flatti has succeeded in combining the best qualities of both the long and short bristled-brushes. The screw-bristled brush coats even the tiniest lash, adding the volume and is strong enough to coat lashes from root to tip adding length.

FS Korea's Flatti is a revolution in eye make-up at its best.

FS Korea’s latest addition to its environmentally conscious dropper range is the PPNBDR, made almost entirely from PP, with the shoulder and loading button connected as one piece.

FS Korea releases the ADR1 LN Auto-loading dropper. The dropper features an elegant and clean design with the option of both automatic or manual loading.

FS Korea adds another dropper to its eco-friendly range. The Go DR MT has a clean design, sustainable materials and a simple 2-step disassembly process ideal for recycling.

The GO B8 Brush: Squeezable brush with integrated bottle

The GO B8 cosmetic brush is the most recent release of FS Korea's GO Brush Range. The innovative brush features a squeezable bottle incorporated into the handle that can hold formula inside.

FS Korea's SLDR Dropper is part of a recyclable range and has many benefits including minimized parts, increased recycling rate, no use of harmful additives such as ‘plasticizer’, all together in a classic and simple design that can easily be disassembled.

DTP Easy Clean Pump is part of FS Korea's eco-friendly packaging range. The refillable pack has been designed with a wide neck bottle that allows for easier cleaning before recycling.

Redesigning the Dropper for a Sustainable Future

With the release of two new environmentally-friendly droppers, the PE Eco Dropper and SLDR Seamless Dropper, FS Korea is your path to a greener beauty line.

The Revolutionary GOBRUSH- Easy to Disassemble, Recycle, and Customize

The GOBRUSH has revolutionized notoriously difficult-to-recycle cosmetic brushes. With FS Korea’s patent-pending design, the GOBRUSH is easy to disassemble so that its components can be recycled and disposed of properly.

Traditional makeup brushes use chemical glues to attach the hair, aluminum parts, and the wooden handle together. FS Korea has developed a new, chemical free way to produce a top-quality cosmetic brush that still stays intact and working for consumers.

The specially designed bristles of the Flatti Mascara delivers long and curling lashes by super-close application to the root of eye lashes, and achieves voluminously long lash effect

FS Korea has launched a new air cover compact with a built-in brush and a comfortable grip which has eliminated many of the disadvantages associated with existing applicators.

Hybrid Airless Compact has been launched by FS Korea

FS Korea has lauched a New Hybrid Airless Compact that offers convenience and a number of other features that make it a game changer with regard to airless cosmetic packaging.

FS Korea has released a perfect collection of dual ended applicators and brushes, aptly named the Parfait collection. The professional set comprises of six applicators and is a includes different sizes and forms to apply make-up to best effect.

A new era of luxury refills

A new era of luxury has been fashioned from FS Korea's new technology. Design friendly and user centric, the new Refill Deluxe refillable container range inspires creativity through its design. It is simple to set up the outer container with the refill and a single push facilitates the removal of the inner refill vessel.

One of the Asian region's most forward-thinking firms, FS Korea has released an incredible and revolutionary way to apply eyeliner. The completely new paradigm is the result of a long research and development process that determined many consumers have difficulty applying cosmetics directly to eyes, due to the delicate nature of the area. The new Eyeliner Compass offers an application method that's safer, easier, and better.

The launch of the All-Round airless compact

The benefits of airless packaging are pretty obvious, and have become a part of the packaging landscape. One of the biggest concepts to emerge in the last few years is that of the airless compact, which combines the features of airless packaging with a common cosmetic concept to offer an upscale product and packaging combination consumers really go for. FS Korea, one of the Asian region's most forward thinking suppliers of advanced packaging concepts, has taken the concept of the airless compact and redesigned it to make it more efficient and useful for a number of cosmetic applications.

FS Korea has once again released an item that clearly demonstrates why the firm is taking the cosmetic packaging sector by storm. Of late, the company has been focusing on delivery methods for cosmetic items, including the new Conceal Pore brush, a great idea that offers consumers a means to dispense foundation directly into an applicator brush without having to touch the actual fluid.

FS Korea, one of the Asian region's primary sources for unique and progressive packaging concepts, has just released a new bottle and dispenser combination item that eliminates the need for overcaps and other subsidiary closure toppers. The Slide Blow line offers a far more elegant silhouette than other solutions with assorted caps, flips tops, and such.

FS Korea has revealed its latest innovation - the Found-Eddy brush. The Found-Eddy brush is a multiple brush designed to work with both foundation and concealer. It is pre-cut into a tornado shape to give light, even coverage providing an "airbrush effect" for the face.

The latest and greatest make up tool: the spatula/brush combination

FS Korea, one of the Asian region's most innovative firms within the cosmetic space, has released a series of brushes specifically designed to offer consumers a better tool for the application of foundation. Each brush combines the spreading capabilities of a fine brush with the direct application utility of a spatula, providing users with a two-in-one tool sure to turn heads.

FS Korea, known to many as one of the region's leaders with regard to the design, development, and deployment of innovative cosmetic and personal care packaging, has recently upgraded its production facilities. The company has set up an ancillary packaging factory that produces key elements to be used with a variety of its core packaging products. The new facilities will produce mostly sponges and brushes, along with the capability to decorate the items created.

Rather than use product and brush separately, the Conceal Pore brush tube by FS Korea allows consumers to use the product in a simple and quick way. The product comes in a tube for liquid make-up with a high density brush.

FS Korea has recently launched its new style of retractable kabuki brush that has a brush-in-brush system. This cosmetic applicator is designed to cover the entire face, and do so delicately. With just a push on the bottom of the applicator, a small brush is revealed for more detailed application.

The Brush and Sponge by FS Korea

The patent-pending, upright, and versatile Brush and Sponge by FS Korea has been designed for those who want the ability to apply different types of cosmetics with one single applicator. The Brush and Sponge combo also features clean lines and an elegant aspect, in addition to its evident utility.

FS Korea has recently launched their Micro Slim Mascara solution. For lavishly long and perfectly defined lashes, this mascara provides the ultimate in shaping. It allows for application of the formula from the root to the tip of the eyelash, with steady application. It is engineered to grasp each lash and elongate lashes - even the tiniest of under lashes.

FS Korea, a company headquartered in Seoul that provides packaging solutions to the international cosmetic market, has launched a new mascara brush that offers some of the best coverage on the market. The brush features bristled head that spins so that coverage is full on each lash and more comfortable to apply.

FS Korea, a company headquartered in Seoul that provides packaging solutions to the international cosmetic market, has released a new dropper system that's sure to turn heads. The new droppers pre-load when closed, ensuring there are no air pockets in the container that will filter up into the pipette, making dispensing more fluid and splatter free.

The Hidden Brush, by FS Korea

FS Korea, a company headquartered in Seoul, provides packaging solutions to the international cosmetic market. The company's latest innovation is a new range of make-up brushes designed to be taken about without getting purses or bags messy. The "Hidden Brush" line offers its own unique and stylish containment system to ensure mishaps are avoided, and is currenlty patten-pending.

FS Korea, a company headquartered in Seoul that provides packaging solutions to the international cosmetic market, has launched a new mascara brush with stronger bristles thanks a new heat treatment incorporated into the manufacturing process.

FS Korea's latest innovation is a new range of make-up brushes called Extremely Soft. These new brushes have a very high density to their hairs, but they still give an extremely soft feeling during the application of the product. 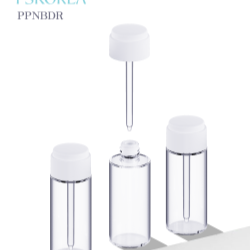 Redesigning the Dropper for a Sustainable Future 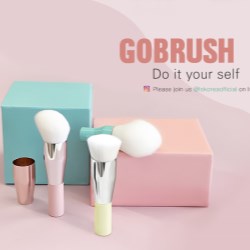 Hybrid Airless Compact has been launched by FS Korea 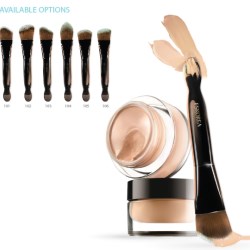