Ecobliss, a producer of blister and high visibility packaging solutions, was one of the 10 finalists in the Gouden Noot 2014 Packaging Innovation Contest, nominated for its packaging concept Locked4Kids. This reclosable carton box in combination with a PET blister tray enables drug manufacturers to package their products in a child resistant manner. Locked4Kids meets the strict European (EN 8317) and American (UN16 CRF 1700.20) standards for reclosable child resistant packaging. The system was extensively tested and certified by the Belgian Packaging Institute. Locked4Kids was officially launched in October, 2014 during the CPhI pharmaceutical trade fair in Paris. Ultimately, Locked4Kids took the second place prize, the Zilveren Noot.

In Europe and America, the vast majority of all drugs are put on the market in carton boxes containing blister strips. There is a substantial chance that, in an unguarded moment, small children might open such a box and swallow its contents. In Europe alone, 3,000 young children die each year from the consequences of drug poisoning or poisoning due to the ingestion of household chemicals (source: www.childsafetyeurope.org). Ecobliss is the first producer to have successfully developed a simple, inexpensive and mass-producible carton box satisfying all stringent requirements that are imposed for child resistant packaging. 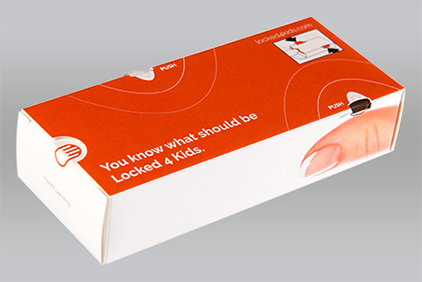 Ron Linssen, Managing Director of Ecobliss: "We designed Locked4Kids with just one objective in mind: to protect small children from accidental poisoning. The laboratory of the Belgian Packaging Institute, an ISO 17025 accredited testing institute for materials and packaging, has certified Locked4Kids. The standards for such certification are very strict. Less than 15% of the test group of children between three and a half and four years and three months in age are able to open the packaging in under 5 minutes. And even after seeing a demonstration of how to open it, fewer than 20% of the same test group are able to open the packaging within another period of 5 minutes. At the same time, of course, opening and closing has to be easy for adults and seniors. We hope that Locked4Kids becomes the new standard for packaging drugs and other products that are potentially dangerous for small children.

The Locked4Kids packaging is composed of a carton box containing a PET blister tray. The box has openings on the sides in which the blister tray is automatically locked when it is pushed all the way into the box. For this, hooks are attached to the edge of the blister tray. In order to be able to open the packaging, both hooks have to be pushed simultaneously, while pulling the blister tray out of the box. This is very difficult for small children. The hooks are placed diagonally to one another at a distance that cannot be spanned by the hand of a small child, but which is no problem for adults. The carton box is coated with a tear resistant laminate so as to prevent children from ripping it apart.

About the Gouden Noot

The Gouden Noot is the world´s most competitive packaging innovation contest. With the Gouden Noot, the Netherlands Packaging Centre (NVC) stimulates innovations in the field of packaged products and packaging. The Gouden Noot owes its name to the unique trophy that contains a solid gold walnut (noot in Dutch), which symbolizes sustainable, effective, and innovative packaging.

As far back as 1995, Ecobliss founder Ron Linssen, together with Professor G. Wouters, developed a new and innovative cold seal technology for blister packaging. Over the years the cold seal technology successfully grew and Ecobliss continued to expand its expertise with new technologies, products and services. Slowly but surely the name Ecobliss has become synonymous with know-how and innovation in the specialised field of blister and high visibility packaging solutions. Locked4Kids is the most recent innovative achievement of Ecobliss.