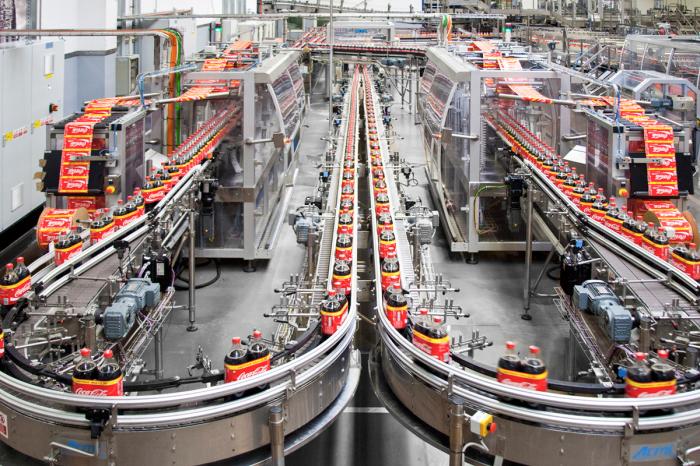 ACMI has designed a revolutionary new packaging system called Easypack, for the production of packs containing two, four and six, which makes use of special elastic bands instead of glue or shrink wrapping.

The Easypack machine has a very compact structure which allows exceptional adaptability within any layout both when it comes to new lines or existing lines which require the shrink wrapper to be replaced. This was the case at the Coca-Cola HBC (Nogara plant, Italy) where two consecutive installations were made on two different lines of 36,000 bottles per hour with 1.5 - 1.75 and 2 litre bottle dimensions. Each line saw the integration of two Easypack systems placed side by side for a total of four machines.

Easypack can produce packs of two bottles (called bipack or duopack), four bottles (fourpack) and six bottles (called sixpack or logistic). At Coca-Cola HBC, the Easypacks installed only produce bipacks, but an upgrade is already forecast for the production of bipacks packed in logistic packs of six bottles proceeding with the simple replacement of the last application head.

The machine can be configured with two, three or four application heads. The function of each head is defined in the design phase of the machine and depends on the desired type of output. The basic configuration includes one single head for the bipack, while more sophisticated versions in terms of output can include a head for fourpacks or sixpacks. The choice of configuration depends on the production speed and the desired type of pack.

A very interesting aspect is the ability to handle promotional initiatives at a very low cost and with less time required. The exceptional aesthetic impact and complete printability of the elastic bands make the application of the promotional sleeves an extremely simple operation, unlike what would happen if the same operation were performed on a shrink wrapper.

In the case of Easypack you simply have to replace the working sleeve with the new promotional sleeve and produce the amount set by the production programme. This operation can be performed whenever necessary and in any machine work cycle phase since the sleeve is replaced instantaneously. This allows great flexibility in the launch of sales promotions and in the management of the packs on offer.

Appearance of the packs

It is important not to forget the external appearance of the packs produced with Easypack that is much more pleasant than a shrink wrapped pack in which the creases on the side of the pack are inevitable. Moreover, unlike the application with glue, the sleeves applied with Easypack exploit the elastic properties of the material and do not damage the labels applied to the bottles, which greatly benefits the external appearance of the product.

Easypack reaches a top speed of 60 packs per minute for each head. This means that a machine equipped, for example, with four bipack heads produces 240 bipacks per minute and reaches a production capacity of 28,800 bottles per hour. If it is necessary to work at even higher speeds, it is possible to place two Easypacks alongside each other on the same line, as per the two Nogara installations (each line has a rated filling capacity of 36,000 bottles per hour). The two machines can share the infeed and outfeed, thus avoiding doubling the conveyors.

Energy saving is clear, especially if Easypack is compared with a shrink wrapper. Not to mention the simpler machine procedure, just the energy saving due to the absence of the oven is considerable. Bearing in mind that it is a machine which is mechanically simpler, even the maintenance intervals are less frequent. During startup of the line it is not necessary to wait for the oven to heat up, and it is not even necessary to include special infeed or outfeed conveyors, saving on material and space occupied. The absence of the oven also improves the operator's work environment.