We are connecting you with a representative of Virospack. Maybe you can help us serve you better answering a few questions: 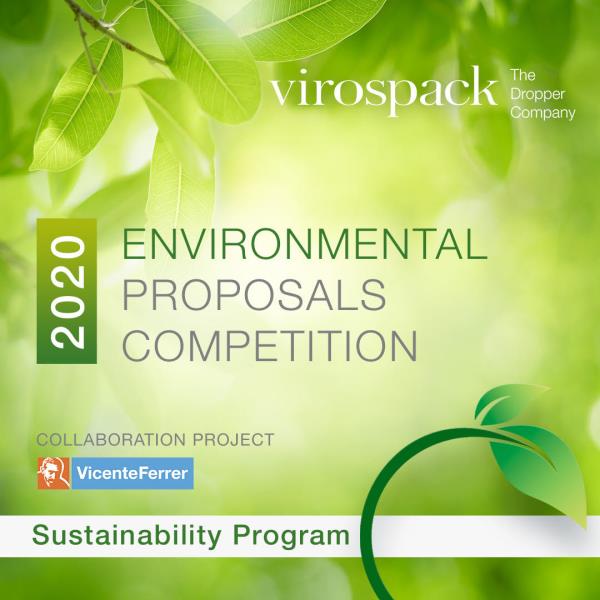 At Virospack we have a strong commitment to the environment. We improve day by day with a clear philosophy "companies not only have the responsibility to produce or expand in a sustainable way, but also to raise awareness and engage their employees about the importance of the impact of their work on the environment", Vicenç Rodríguez - CEO.

At Virospack, we have achieved many environmental improvements in a short time as a result of multiple actions and initiatives included in our Sustainability Program. Among them, we highlight the Environmental Proposal Competition and the winning projects.

At the end of 2019 Virospack signed a collaboration agreement with the Vicente Ferrer Foundation. This foundation has several projects underway to eradicate poverty and ensure sustainable development in South India.

Several projects were preselected by the Virospack Environment Committee, and all company employees were invited to vote to choose one. The winning project was the construction of water structures.

At this same time, Virospack was launching its Environmental Proposals Competition; a competition to select the three best proposals that would then receive an award. The most important feature of this initiative is that all the savings achieved by the company during a year as a result of its environmental proposals would be used to help the population of India that does not have drinking water, with the intention of preserving the natural water in the area and provide them with water for agriculture and to drink.

The involvement of the full staff in this project has been a success. For this reason, Virospack Environment Committee applauds and thanks everyone for their participation and the quality of all the received proposals.

Given the current situation caused by Covid-19, last week Virospack summoned the three winners for an intimate awards ceremony, respecting all personal security measures. Isabel Pérez, Operations Manager at Virospack, and Santiago Guasch, Head of the Paint and Metallization sections, -both members of the Environment Committee- presented the awards to:

Torcuato Hernández from the Metallization section of Virospack, is the winner of this first edition.

His project to reduce the energy consumption of metallizing machines has been awarded the first prize. His new program proposal has allowed the metallizing section to save more than 20,000kwh.

The second prize (first runner up) has been to Montse Guerrero, Head of the die cutting section.

Her proposal for casting water waste with silicone to avoid hazardous waste has led to the reduction of one ton of this type of waste per year in its section.

Carmen Domenech from the glass section has won the third prize (second runner up).

The design of new boxes for recycling at the end of the painting and metallization lines has made recycling easier for all colleagues, reusing elements that —without these new boxes— would have been discarded in the glass section.

Congratulations to the three winners and to the rest of the staff, and many thanks to all.

Health and safety are a priority at Virospack

Virospack wins at the XXI edition of the Antonio Baró MC Mutual Awards because of its effective Occupational Hazard Prevention policies.

Cosmoprof Asia, Asia's leading beauty event is back with the Singapore Special Edition and Virospack is looking forward to meeting everyone at booth #2-D15.

New treatment for hands and cuticles is beautifully displayed by Virospack

Emilie Heathe introduces a new elixir for hand and cuticle care, presented in a dispensing packaging solution by Virospack: a premium and sophisticated pack composed of a black dropper and 30ml molded glass bottle.

Virospack’s tubular glass vials offer an excellent level of clearness, a completely see-through and polished look that exudes the luxurious finishes the company is known to deliver. The fantastic strength-to-weight ratio and dimensional stability take the vial to the next level, ensuring the delivery of a sophisticated solution that both looks good and keeps products safe.

Meet Virospack at the latest edition of Luxe Pack in Monaco!

Come to Luxe Pack Monaco and visit our booth - RA 18 - to find out about our newest eco conscious droppers.

Enjoy the new serum of Natura Bissé. Apply it with precision thanks to its dropper pack manufactured by Virospack.

Come to our facilities. Visit comfortably from your computer all our sections and productive processes.

Jordi Salas, Virospack's Technical Manager, joins us to discuss alternatives, projects and solutions Virospack has launched to achieve true sustainability in the packaging and cosmetic industry.

Sustainability is no longer a trend, it's a need. Discover the range of 100% recyclable droppers from Virospack, the specialist in droppers for cosmetics, made with PCR (post consumer recycled) material.

With strong investment in R&D, Virospack is dedicated to ongoing improvements and new developments. The Dropper Company has just released new solutions to better serve its international clientele.

Think elegance is at odds with dependable security? Let the new Virospack safety lock dropper change your mind. The new metal shell finish from Virospack for its Secure Dropper gives a premium look with maximum safety.

After two long years, the MakeUp In Los Angeles show will once again be held again. Beauty brands and solutions providers from around the world gather in the most populous city in the state of California and one of the most in-demand travel destinations in the US.

Under the rule of the Water-Tiger, an animal that scares away bad luck, this year on February 1st, we celebrate one of the most well-known traditions around the world. VIROSPACK ASIA is excited to be a part of the festivities for The Spring Festival, or Chinese New Year, for the first time.

Virospack Asia, the new company from the Virospack SLU Group

VIROSPACK is excited to share the good news- the launch of a new company, Virospack Asia. This expansion will increase its place in the Asian market, provide better service to its customers, and allow the company to continue growing.

Discover the new Calm-Essential range from CLARINS, a perfect restorative treatment oil for the most sensitive skin in a beautiful dropper bottle and bulb pipette pack from Virospack

Virospack has reached an agreement with the software provider IFS to use their IFS Cloud solution to optimise production and material traceability, as well as reinforce an environmental commitment.

Quality, Much More Than Meets the Eye at Virospack

Virospack, a leader in dropper technology, takes quality seriously. We talk to Laura Polo, Quality Manager at Virospack, to learn more about how the Quality Department is present in every process in the company.

Hold on to summer with a Viropack full pack bottle

Virospack Wins Gold for Design at the iDermo Awards

The iDERMO.com Awards recognize the best skin care and over-the-counter products sold in Spain. For the 2021 awards, Virospack is proud to win gold for the Best Design and Packaging.

Bold combinations and a new dropper make the difference this summer

VIROSPACK, with a wide catalog of standard references and customization techniques offers fully customized solutions for brands, is committed to color and the most sensual designs. Virsospack is also introducing a new dropper to the market for this season.

This year, Virospack has also participated in the 2021 Make Up in Shanghai event as was awarded The BEST INNOVATION IN PACKAGING.

NUXE needed a customized dropper that would deliver the results they needed, so they chose Virospack to develop a full dropper dispenser pack. This customised dropper bottle is precise, easy to use, and high-quality.

Sustainability in Every Drop: Virospack’s Ongoing Commitment towards a Greener Future

Virospack isn’t just talking about sustainability, it’s acting on it, and quickly. Rosa Porras, Marketing and Communication Manager, and Aida Rodriguez, Environment Manager, talk about Virospack’s bold moves towards a more sustainable future, how they are achieving it, and what's on the horizon for Virospack this year.

Last weekend, March 21st, International Forest Day was celebrated, and VIROSPACK, a leader in the dropper industry that is committed to the environment and responsible forest management, joined in the celebration. Because forests are the lungs of the planet, and so necessary for our lives, VIROSPACK wants to contribute to the awareness of society to promote its care and protection

This year more than ever we must celebrate the arrival of spring. It surrounds us with with pops of color, more hours of sunshine, light, energy, happiness, and all around good vibes. It is no surprise that it's many people's favorite season.

Ranavat chose an autofill dropper pack manufactured by Virospack. The elegant package is composed of a moulded glass bottle with an autofill push-button dropper.  Virospack's full pack gives this wonderful moisturizing serum a premium image to match the brand.

Laboratories Uriage, known for its dermatological products with Uriage Thermal Water as the main active ingredient to preserve the health of the skin, presents its new Bariéderm-CICA Daily serum. Formulated with 98% natural ingredients, the serum is packaged in a dropper dispenser pack manufactured and decorated by Virospack.

Virospack advances its commitment to sustainability

Virospack has advanced its commitment to sustainability with the creation of a new section on its corporate website that highlights the company's transparency.

At first, it seemed impossible! It was very complex to reach our quality standards with a noble material like wood, but at Virospack, we did it! Now, we can offer the market a wooden dropper cap, without plastic threads or glue, and with a very low environmental impact.

If you are looking for a touch of elegance, check out Virospack range of metal shell dispenser dropper packs. It's a range of glossy, luxury and premium metal finish, which has expanded through the addition of a new 30ml metal shell bottle that fits with the company's 20/410 neck cosmetic and push button droppers. 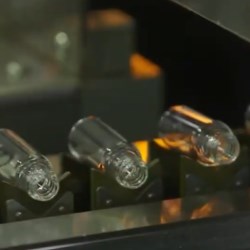 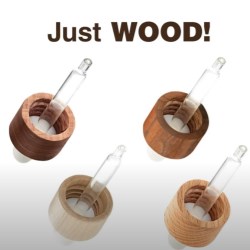 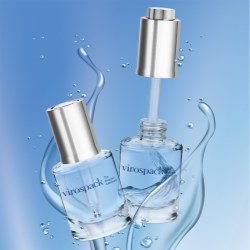 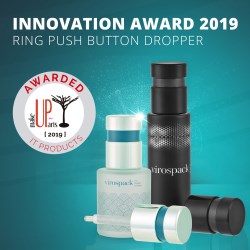 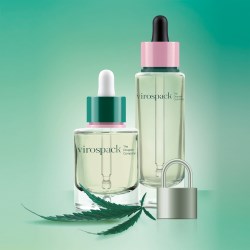 The certified secure dropper for CBD 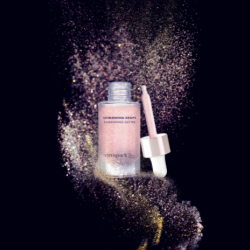 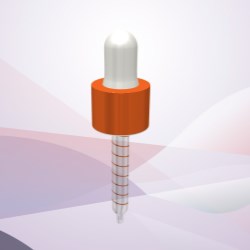 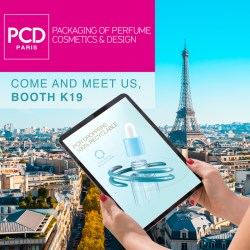 PCD Paris returns and VIROSPACK is all ready to attend...