We are connecting you with a representative of GEKA GmbH. Maybe you can help us serve you better answering a few questions:

GEKA continues to enforce its IP rights and protects its customers 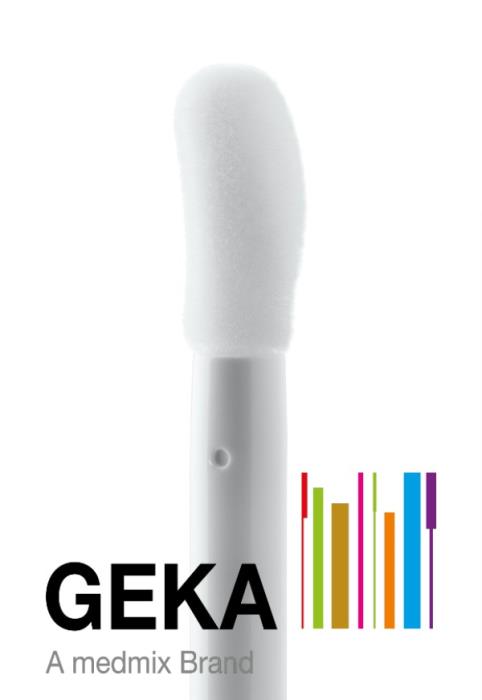 GEKA has discovered several copies on the market of its very successful flocked applicator product -the DEFINER MAX lip applicator- an applicator similar in appearance to a boxing glove.

The company Pixi Ltd. London, UK was one of the first competitors to be sued for infringement of the German design right DE 40 20080042121-0009, which protects the unique visual appearance of this lip applicator.

On November 8th, 2021, GEKA has received an acknowledgement judgement from the Frankfurt Regional Court; Pixi had not put forward any convincing counterarguments and, in view of this, has consented to the judicial lawsuit and its judgement. Several other infringers have agreed to end their infringement in out-of-court settlements.

Thus, the design right registered for the applicator created by a very well-known Hollywood designer has proven its strength once again. GEKA's attention is now directed to further enforcing this registered design against other infringers.

As a leading manufacturer of high-precision beauty application solutions, GEKA regularly develops new innovations and protects them by intellectual property rights. As such it has more than about 400 registered designs and 150 patents and pending applications.

GEKA has enforced its rights in dozens of prior cases already, protecting its own IP rights as well as the rights of its customers against patent-infringement and counterfeiting. Copies of GEKA products by other manufacturers are not subject to GEKA's strict quality controls and are therefore not covered by its warranty. In the interests of its customers, GEKA will continue to take legal steps against all such copies.

In line with its local for local growth strategy in China, medmix has signed an investment agreement to acquire a majority stake in Guangdong Qiaoyi Plastic Co. LTD, a beauty manufacturing business in Shantou. This latest acquisition will strategically position medmix as a player in the Chinese beauty sector, the fast-growing second largest cosmetic products market in the world.

medmix Beauty brand GEKA has once again been recognized by the CDP for its global sustainability initiatives, earning an industry-leading B rating for its efforts to reduce climate change. The CDP reports cover the company’s actions and objectives to promote sustainability and water security among other activities, providing transparency for the company’s customers and suppliers.

Reinforcing its drive to create a greener beauty industry, GEKA has been awarded its third Platinum rating for sustainability by EcoVadis. A leading provider of high precision cosmetics application solutions, medmix Beauty brand GEKA continues to demonstrate leadership in its sector as part of the top 1% of companies assessed.

The new molded brush is specially designed to spread the lashes and features 2 application zones.  Bristles can now be found at the brush tip, making them ideal for sharp separation and precise final touches.

GEKA has received this award from the Bavarian State Ministry for Environment and Consumer Protection within the scope of the "Blühpakt Bayern" for its flower- and bee-friendly outdoor areas.

For the second year running, the EcoVadis assessment places GEKA Elgin in the top 5% of all facilities assessed, with the site receiving a Gold Medal rating for sustainability.

GEKA’s latest natural mascara product comes complete with a cradle-to-gate CO2 footprint analysis.  Made of 100% Post-Consumer Recycled (PCR) resins – this product boasts of a 12% reduction in CO2, an equivalent of 15.2 g of CO2 vs. similar products made of virgin plastic.

GEKA was chosen by the prestige brand Lancôme to make its latest product: Complexion Idole Ultra Wear All Over Concealer by using a shatterproof plastic that is reminiscent of glass.

The indigenous-owned sustainable cosmetics brand from Canada has partnered with GEKA to produce the Sustain Brow Gel and Sustain Mascara.

GEKA designs an effective mascara pack for voluminous application with Inika Organic, using deltaFIBER technology. The eye-catching pack has a matt satin finish with a clear lacquer, blending together matt and gloss effects.

The Master Hold Brow Gel uses long fibers of the EOS brush to reach brows directly at the root and short fibers to ensure definition of each individual lash.

As a part of medmix, a global leader in high-precision delivery devices, GEKA (medmixBeauty) is releasing its first Sustainability report, outlining the commitment to and progress towards the company’s sustainability goals.

Soul Craver’ is a beauty collection that shows how market trends can be transferred into products, application performance, decoration, and product appearance. Inspired by a beauty trend for autumn/winter it comes with new ready-to-go solutions and high-performing cosmetic applicators.

GEKA has been awarded a B Supplier Engagement Rating (SER) by the CDP for reducing the climate impact of its supply chain. The rating builds on an overall climate change score of B for GEKA in 2021, illustrating how the high precision beauty application expert is taking a leading role in sustainable cosmetics.

GEKA converts the latest beauty trends into products ready for sale- look at the Brow Duo brush in 2022's Color of the Year.

GEKA Shares its Market Knowledge And Feel For Trends

GEKA develops packaging that consumers want by researching social and consumer macro-trends and transforming them into clear, innovative solutions for color cosmetic ranges.

For this new makeup collection, GEKA produced the mascara and eyebrow mascara in reliable, sustainable PCR materials and by using bio-based fibers developed from castor oil for the brushes.

GEKA, a leading provider of high precision beauty application solutions, has once again been awarded a Platinum medal for sustainability by EcoVadis. This rating places GEKA in the top 1% of companies assessed in its sector for the second year running.

CDP report reaffirms GEKA’s position as a leader in sustainability

GEKA, a pioneer of high precision beauty application solutions, has been recognized by the CDP for leading the way in cutting the environmental impact of plastic product manufacturing. The report, awarding a climate change score of B, will be used by the company to support its sustainability strategy and provide transparency to its customers and suppliers.

GEKA's new collection of packaging solutions takes its inspiration from the beauty of the city of Paris. The collection features innovative and high-performing cosmetic components that boost any beauty line. The charming collection contains top-quality Mascara packs, Brow Serum brush and tube, Liquid Lipstick tube, and a consumer-friendly Lash Curler.

GEKA’s leading beauty applicators on show at MakeUp in Paris

GEKA will attend this year’s MakeUp in Paris exhibition to share its latest application solutions for liquid cosmetics with the industry. Magical results land innovation award for pureDEFINITION mascara brush

GEKA is excited to see its international clientele at this year’s MakeUP in Paris show. The company is pleased to announce that it will be showcasing its award-winning bi-injected "pureDEFINITION” brush among GEKA’s other popular cosmetic components at the show.

GEKA’s branch in Elgin, Illinois, has been awarded a Gold EcoVadis Medal, placing it in the top 5% of companies assessed.

Creating a futureproof, customer-centric factory GEKA’s expanded headquarter will help to deliver the applicators of the future

GEKA steps up its decarbonization commitment

As part of its ongoing strategy, GEKA has completed an independent verification of its carbon footprint with TÜV NORD. One of its steps towards building a cleaner cosmetics industry, the business has had its data verified to help identify CO2 reduction opportunities.

Discover the world of beauty powered by GEKA.

Look FLAWLESS with crystal clear cosmetic bottles made with PCR

Continuing on its mission to help the beauty industry realize a cleaner future, GEKA has launched a sustainable cosmetics packaging solution for concealers, lookFLAWLESS. With its core components, including a crystal-clear bottle, incorporating recycled materials, this all new product offers a more environmentally friendly way to effortlessly apply liquid makeup.

GEKA will showcase its latest packaging solutions for liquid cosmetics and skincare products at this year’s MakeUp in Shanghai exhibition. Selected from around 40 products, the company’s new fusionAPPLICATOR has received a prestigious IT PRODUCTS award and will be highlighted at the event’s innovation kiosk. 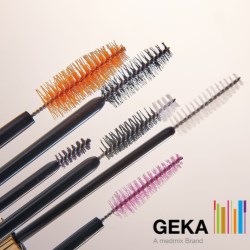 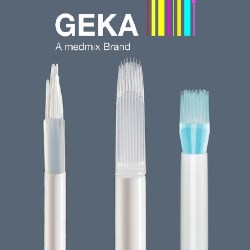 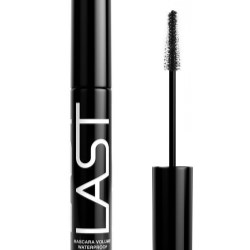 GEKA’s leading beauty applicators on show at MakeUp in... 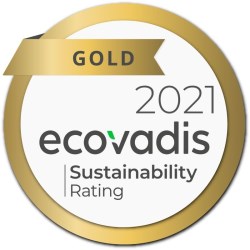 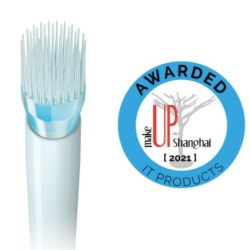 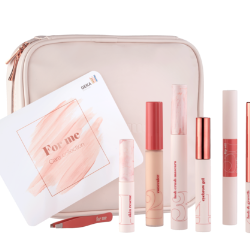 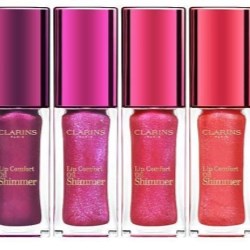 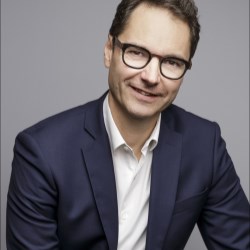