A Swedish dairy producer is using the SuperLight™ pot from RPC Superfos to pack its new range of Quark. Skånemejerierne chose the thermoformed polypropylene container for its Lindahls Kvark brand after deciding to stop importing from Germany and produce and pack the product in-house.

The 500g SuperLight™ is decorated by offset printing in six colours, and features different artwork for each of the 25 flavours in the range, which include vanilla, coconut and strawberry, as well as other varieties such as low-carb lactose-free raspberry.

After swapping to their own filling line, Skånemejerierne’s Quark production has become more cost-efficient with the intention of further strengthening its market position in Sweden and other European countries. Importantly for the company, the change of packaging has gone unnoticed by end-users.

“The aim of the entire project was to maintain the same packaging standard as before, with only ourselves noticing the changes," explains Thore Bengtsson, Purchaser at Skånemejerierne.

"We asked RPC Superfos to deliver the same type of pack as the one we used to import, and we got what we asked for, even within a very tight time schedule. We’ve had superb cooperation with RPC Superfos, who have given us the right product quality, service and support on time and according to plan.”

Full of healthy proteins, Quark is very popular among fitness fans and athletes.

Optimal pot for Optimel salad is a recipe for success

A different shape and a convenient lid have made the SuperLock pot from Berry Superfos a great match for a new range of healthy and tasty Optimel salads from Friesland Campina produced by the Dutch company Royal Smilde Foods.

The switch from black to semi-clear plastic for a cake tub has had a significant impact on the pack’s sustainability profile. Thanks to the change, the 1080ml tub manufactured by Berry Superfos, for a range of cakes produced by Park Cakes for leading food retailer M&S can now be described as ‘widely recyclable’ in the UK.

Tangerine Confectionery was looking for a high-quality, colourful, and creative pack to re-launch its Barratt seasonal range of the UK’s favourite sweets. The vivid colours of the SuperLift® tubs, made of widely recyclable polypropylene, provide strong shelf standout and have generated fantastic in-store backing with feature space and promotional support, which has led to an increase in demand for the sweets.

In conjunction with its label supplier Korsini SAF, Superfos, a company of Berry Global, has received an award for Best Label Design at the 2019 IMDA Awards in the United States. The winning label is made for Heinz for its Cream of Tomato Pot Soup and Vegetable Pot Soup sold in a 400ml SuperLock container that showcases the cutting-edge In-Mould Labelling technique from Superfos.

Italian company Carioca SpA has chosen Superfos, a company of Berry Global, for their ability to provide different-shaped and sustainable pack solutions. Carioca saw an opportunity to step up its offering by changing the shape of the packaging for 48 Jumbo felt-tip pens from a round container to a square UniPak pail from Superfos’s standard range.

A survey conducted by the Danish Technological Institute has shown that 14% of Danish household food waste stems from meal leftovers. Although these can be reheated, very often this is in a microwave oven, and the survey identified that many find the uneven heating of this process makes the food less savoury. In an attempt to alter this behaviour, RPC Superfos has contributed to the development of a new multifunctional plastic storage box which ensures a more even distribution of the microwave heat.

The EasySnacking pot from RPC Superfos is providing a Norwegian dairy with an innovative and image-enhancing packaging solution. Organic dairy Rørosmeieriet was seeking a pack that would support the creative profile of the dairy. The company is now using the sleek EasySnacking pot for its Niste range of yoghurt with muesli topping, as well as for sour creams.

RPC Superfos has introduced a number of initiatives to further enhance its packaging solutions incorporating post-consumer recycled (PCR) polypropylene. The company has worked with recycled materials for over 10 years and today offers a range of PCR pails in many shapes and sizes.

Quality and functionality from ice-cream pack

The high quality, user-friendliness and eye-catching decoration of the sleek EasySnacking pot from RPC Superfos are key factors in its selection for a new range of ice-creams from Russian manufacturer Taice. Thanks to In-Mould Labelling, it is possible to show the texture of the ice cream in razor-sharp photo quality on the packaging. This is complemented by the striking purple colour of the lid that catches the consumer’s attention.

Advanced in-mould labelling from RPC Superfos has been a critical factor in the successful relaunch of a range of high-quality paints and primers from Bosnia and Herzegovina paint company BAUklar. The injection moulded SuperOval pail feature close-up drawings of tigers with striking details and appeal that form the essential visual communication of the pack. In-Mould Labelling (IML) makes it possible to reproduce even the finest details of the tiger design, so that end- users can almost feel that they can touch the whiskers.

The UniPak pot from RPC Superfos is providing a gelato ice cream company with its ideal packaging solution. Palazzolo’s Artisan Dairy is particularly pleased with the UniPak’s tamper evident feature, as well as its spoon in the lid and high-quality graphics, and the collaborative partnership the company enjoys with RPC Superfos.

The relaunch of a popular Slovenian chocolate spread in RPC Superfos’s SuperLock pot has created enhanced on-shelf appeal and contributed to good sales progress. The eye-catching artwork for the pots features a cute cartoon character, and thanks to the advanced in-mould labelling technique from RPC Superfos, the graphic detail is rendered to perfection.

The installation of new injection moulding machines and the reuse of heat from cooling are among the successful energy reduction initiatives at the RPC Superfos Randers facility in Denmark that have enabled the site to achieve ISO 50001:2011 certification ‒ an Energy Management Standard issued by independent authorities – for the second year in a row.

Romanian dairy producerProdlacta Brasov has appointed RPC Superfos as an additional supplier of plastic packaging. The company chose RPC Superfos because of the quality, service, delivery times and commercial solutions that it offers.

Two variations of a bespoke tub from RPC Superfos, one featuring a lid from RPC Bebo, are being used for a new spreadable butter from Müller Group, Germany’s largest dairy company.

The EasySnacking pot from RPC Superfos is being used for a new cereal product that allows consumers to enjoy premium cereal straight from the pack. Ideal for modern customers, Le Petit Déjeuner from Greek company Tsakiris Family is a healthy whole-wheat cereal rich in dietary fibre that, thanks to the EasySnacking pot, can be enjoyed plain or with milk in a single serving size.

RPC's popcorn pot is a hit for NoCrapGourmet

RPC Superfos’s SuperLock pot is delivering the convenience and on-shelf appeal that has contributed to the successful launch of a new gourmet popcorn for Danish start-up company Nordic Gourmet Factory.

The SuperCube pail from RPC Superfos is at the centre of a growing success story after being chosen to pack 100% biodegradable vineyard clips that ensure the vertical growth of vines. Since Compagnie des Agrafes selected the SuperCube® for its special clips, both product and pack have attracted rave reviews and the clips have enjoyed an upward curve in sales.

A leading producer of processed and packaged olives has selected the LongLife container from RPC Superfos to pack its full range of products. All 17 varieties of Madama Oliva’s high quality olives made from traditional Italian recipes are now sold in the LongLife pack.

Early quality accredition for US factory

Only two years after its inauguration, the RPC Superfos US facility in Winchester, Virginia has successfully passed its first BRC certification audit with Grade A in the High Hygiene Category. This success provides US customers seeking first-class injection moulded packaging solutions for food and non-food products with independent confirmation of the site’s high quality standards.

The SuperCube® pail from RPC Superfos is at the centre of a growing success story after being chosen to pack 100% biodegradable vineyard clips that ensure the vertical growth of vines. Since Compagnie des Agrafes selected the SuperCube® for its special clips, both product and pack have attracted rave reviews and the clips have enjoyed an upward curve in sales.

RPC Superfos is supplying the plastic cans for interior wall paint and façade paint from Slovenian producer Helios. The company selected the SuperOval pail from RPC Superfos because of its user-friendliness, light weight, and sustainability. Spektra® Classic Plus is now sold in three sizes – 5.5, 12 and 18 litres – of the SuperOval pail.

A German meat producer is using the SuperLift plastic pail from RPC Superfos for its bulk-pack sausages. Metten Fleischwaren opted for the RPC bucket for its long shelf-life, easy-handling, and brilliant look, as well as its In-Mould Labelling oxygen barrier protection.

An innovative spoon-in-the-lid from RPC Superfos for its popular 75mm container is guaranteed to make yogurts, desserts and other dairy products stand out from the crowd. The new solution is perfect for consumers who eat on-the-go, with the foldable polypropylene spoon simple to access, assemble and use. The APET lid features a fine PET seal that is easy to tear off. As such, it represents a significant improvement over similar lids which are sealed with aluminium foil, and thus oblige the user to find the spoon with which to eat the product.

A polypropylene pack from RPC Superfos is being used for a shellfish range from Spanish frozen seafood company Original Gourmet. The rectangular SuperCube® bucket enables reuse and is ideal for branding – two benefits that the Premium Shellfish® range’s previous cardboard packaging was unable to deliver.

IML gets gold and silver seals of approval

The In-Mould Labelling (IML) capabilities of RPC Superfos have been endorsed after three labels used for its high-quality packaging solutions won prizes at the 2017 IMDA Awards. At the ceremony for the inaugural awards, run by the In-Mould Decorating Association of the United States, labels for RPC Superfos packs picked up one Gold and two Silver awards.

RPC Superfos’s CombiPac® tub is being used to pack a new range from the UK’s favourite butter and spreadable brand. The line extension for Lurpak Spreadables offers tasty new infusions, but the pack retains the well-known silver shine from the parent brand.

Evolution not revolution for bespoke tub

A bespoke tub from RPC Superfos has been selected to pack the popular Forssan range of salads made by Atria Finland. Replacing the range's previous pack of 15 years, the new design combines a subtle yet effective makeover with a considerably lighter container, reducing the amount of packaging waste. The new bespoke pack was developed in close co-operation between Atria, its design agency and RPC Superfos.

An innovative, bespoke pot from RPC Superfos is helping a Czech food company attract and connect with customers. The eye-catching and convenient solution for Delimax's Varmuza salad and delicatessen range features a QR-code on the side, enabling customers to learn more about these premium products and the company.

Easysnacking is the ice-cream of the crop

A UniPak container with an in-built strainer from RPC Superfos is being used to pack a new range of seafood products in brine and oil. The mussels, shrimps, octopus and seafood cocktails – from Santa Bremor, the leading seafood producer in Belarus – are not only benefitting from the pack’s convenient design, but also from its novelty value, which marks it out from the competition.

Optimal pot for Optimel salad is a recipe for success 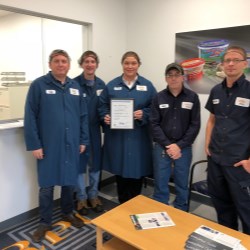 Early quality accredition for US factory 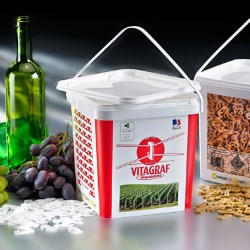 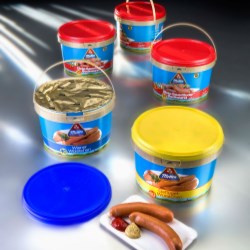 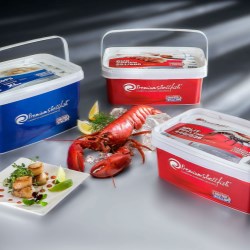 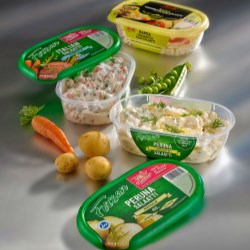 Evolution not revolution for bespoke tub